New Year’s Eve, so much pressure to find The party, get dressed up, have someone to kiss at midnight…it’s kind of this single-girl’s nightmare; so this year, I’m putting on my best wunder unders, favourite tank and rolling out my yoga mat. It will be an evening of asana, intension, music, coconut water and raw chocolate; call me lame, but I’m pretty excited about kicking off 2013 on this positive foot!

As cliche as it is, New Years is a great time to clean the slate and layout some goals for the coming year. I prefer the word “goal” over “resolution” because I feel goals are more specific; therefore, “easier” to achieve. The thing about “New Years Resolutions” is that people jump on the January 1 bandwagon and try to change everything, all at once, and, inevitably, fail, then give up. Usually all this happens within the month of January.

So, how does one increase the chance of success? I like setting goals and I like the SMART model for basic goal setting; make the goal:

However, I don’t like “basic” goals so I like these tips from lululemon on achieving BHAGs (Big Hairy Audacious Goals):

As I’ve blogged in previous posts, 2012 has been an incredible year of goal crushing for me and a few of the things I’ve found to help me are:

In addition to revisiting and updating my 2012 goals for 2013; I will be adding a new trick in 2013: an empty glass jar! As good/great/awesome things happen throughout the year, write them down and put them into the jar. For me, this will serve two purposes:

What are your BHAGs? How are you planning on achieving them? What tips to you have?

Well, it’s a stormy summer night in Vancouver, and I’m not watching Batman like I was supposed to (see earlier post), so instead, I’m post-happy!

Last weekend I did something I NEVER thought I’d do! I went skydiving! O-M-G!

I think I mentioned in an earlier post not to judge yourself and what you think your life will be like and this was one of THOSE experiences! So here’s the story, maybe you can learn from my “mistakes” (read: be careful of the commitments you make, but allow others to help you push your boundaries).

Once upon a time, I was crushing on this guy who loved to skydive. After 11 meetings, he asked me out and we started dating. During our first few dates we talked about his love of skydiving and my fears of jumping out of perfectly good airplanes; he shared that his goal was to become a Tandem Master and, being a “girl in like,” I told him that when he achieved his goal, I would celebrate with him by jumping out of a perfectly good airplane strapped to him. Well, this summer, three years after I made this commitment, he achieved his monumental goal, and, even though we are no longer together, he strapped me to him and we jumped out of a perfectly good airplane together…and it was AMAZING! I think sharing that moment with him was just as amazing as jumping out of the plane 🙂

There are only a few people in this life that are able to give us the support to push our limits; allow them to do that!

Recently The Globe and Mail published the article Bucket list for kids: 50 things to do before they’re 12. We all know our lives are too sedentary and kids, especially, aren’t as active as we were when we were growing up. I know I took my childhood for granted! Saturdays were spent riding bikes, “playing” tennis, swinging on swings, climbing trees, jumping on my net in the woods, finding deer bones on the ridge, building boats out of bark, combing the beaches…today, kids…um…watch tv? 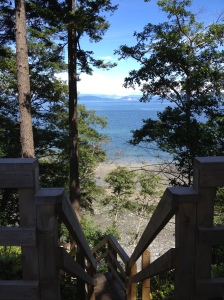 I’m not a parent yet, but reading this list, and a recent visit to my childhood home, has definitely reinforced how important it is for parents to ensure their children get to experience at least some of these activities!

I also feel that you’re never too old to play, and, whether you have children to do these activities with or not, try to cross off a few more activities from your list!

Error: Twitter did not respond. Please wait a few minutes and refresh this page.